Two weeks ago I was out on a decidedly damp Exeter evening timing the Green Lantern race with Wild Running. By damp I mean torrential rain. It was a self nav slightly longer than half marathon run, around the Green Circle route which envelopes Exeter. I haven't run it yet but want to.

Timing was all NFC chip based using bluetooth NFC readers as described by Webscorer here. There was one timing point on the course (two readers plus a phone and speaker), and one at the finish (tablet plus four readers). The timing point on the course was using a SIM CRITICAL, whereas the finish was using an EE SIM. Firstly a note about the SIM CRITICAL - it works, it works really really well and I'd highly recommend them for low data remote timing points.

Webscorer was setup to use multi-device timing and that worked well, with live results being streamed directly onto the web. Starts were individual and activated by a runner scanning in, me manually tapping them out via webscorer.

There were two main areas to work on- 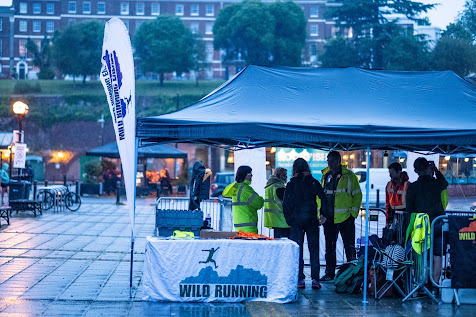