Steve organises brilliant races at Grammarcombe, as this one was no exception. 150+ competitors, four races and three brilliant courses (under 8s, under 10s & 12s, and juniors upwards).

Steve has a mountain biking weekend coming up, sign up here.

Timing wise this was a passive RFID timed race, using Sportiva Event's RFID gear I've written about before. Webscorer was the software of choice. The setup was as shown below. 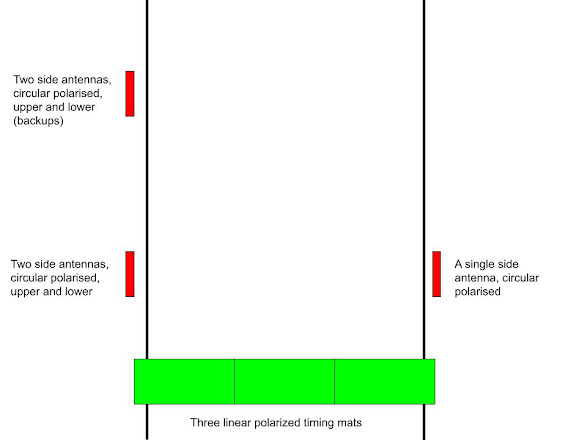 There's not much to report on the equipment front. It all worked seamlessly. All the kit was in bright sunlight. With the previous networking kit we were using this would be enough to trigger an overheat, killing the network and therefore the readers. However, the new Teltonika modem/router and switch performed without any issues.

Antenna performance is as below. This analysis is from the largest race (96 competitors).

I was very happy to see so many reads on the mats and none on the backups! This is probably a product of the chips we were using. Each bike had a dogbone tag stuck to the reverse of the number board. Obviously there is a price premium for disposable chips, but it definitely paid off for this race. I suspect we would have got similar results with ankle tags, but would have expected more side antenna reads.

The ever present lap issue

The way the large, junior upwards races run at these events is a headache. Within one race there are 11 races, each with a different number of laps. Trying to work out who to stop when gets confusing, and ultimately there is a risk of stopping someone too early / too late. Webscorer seems to fall a bit short in this regard, where I could really do with a simple read out of who is leading each category and how many laps they have left. I tried to make a simple recording board to help with this (see below) but more work is needed in this area, ideally on Webscorer, we shall see! 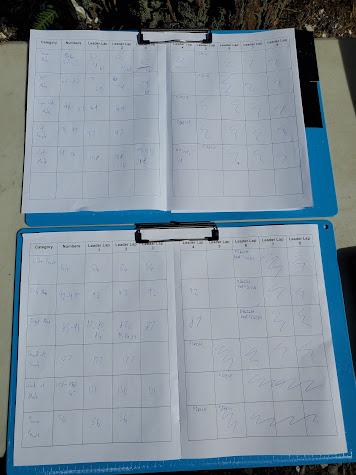