Sorry for the lack of recent updates - back on the day job now which limits the time I spend building timing gear.

There's a scene in one of my favourite films, Apollo 13, where the engineer John Arron highlights that the battery capacity is one of , if not the, main limiting factor on the crew's survival.

Now, whilst the situation in scene is considerably more critical than in a timing device, the principle is the same. Electricity is everything. For about a month I've been chasing errors, particularly when using LTE, which have been causing unexpected restarts or loss of communication.

The culprit, it turns out was the power supply. Now I'm not 100% sure how the Pycom board is wired, but essentially the LTE modem / wifi connection pulls from the 3.7v nominal LiIon connection. Which only charges from usb at a rate of 100mA (the battery was 1000mAh). The modem and wifi are known to cause a current spike when transmitting. Net result, very quickly I was getting errors sending data.

Solution? Move to a single 3.7v source. Slightly terrifyingly, the only way to do this affordable was to create my own battery from 18650 cells and a better charging circuit. There be a full diagram soon, but it works, and works well. There's been a couple of component changes too. For now, here's a photo of the development kit running the new battery. 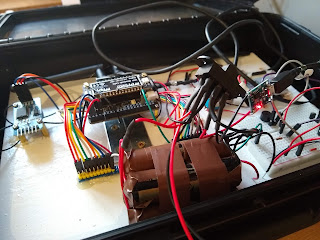